A proposed new Transport Bill to be announced as part of the Queen's Speech on Wednesday (18 May 2016) will help pave the way for autonomous cars. In its role on the 'Automated Driving Insurance Group' safety experts at Thatcham Research have identified the key stages of automation, which is also provided in graphical form.

2016
Today's car is already a world apart from where the car was even 10 years ago. Many new cars are fitted with cameras and radars to monitor hazards ahead and automatically apply the brakes in case of a potential crash or guide the vehicle back into lane if the driver is not paying attention. However, the driver remains in full control.

Some of today's cars have low speed driving assistance systems such as Volvo's Pilot Assist, which can drive the car at low speeds controlling the steering, acceleration and braking. It operates at speeds up to 30 mph and will continue to operate as long as the driver proves he or she is still in control by keeping their hands on the steering wheel.

2018
2018 will be a landmark year. Cars will become a lot smarter with even more advanced driver comfort features and with regulations now permitting hands-off driving on motorways. The driver retains responsibility and will be expected to take-over control in case of unanticipated situations or system failures.

For motorway driving, some cars will feature an 'auto pilot' function, automatically driving the vehicle and allowing hands to be taken off the wheel for around 3 minutes at a time. This might allow the driver to check the sat nav or to look at an important email, but after 3 minutes the system warns the driver that they need to re-engage with the car in some way usually through putting their hands back on the steering wheel. If this doesn't happen the system disconnects and the car will perform a minimum risk manoeuvre to bring itself to a controlled safe stop. The driver remains in control.

2021
Moving towards full autonomy now. On defined segments of motorway the car is able to take complete control allowing the driver to disengage from driving completely and to do other, unrelated and more time consuming tasks such as reading a book. With a full sensor pack including radars, cameras and laser scanners the vehicle is able to build up a complete picture of the immediate road and traffic environment and to use lateral steering adjustments and longitudinal braking and acceleration inputs to navigate safely within it.  Such a vehicle would also likely be equipped with high specification Advanced Driver Assistance Systems to aid the driver at the times when they are in control.

2025
By 2025, it is envisaged that the car will be able to drive itself, fully hands free from door to door. This will include the whole range of typical driving environments in cities and in urban environments as well as main arterial routes and with the ability to negotiate traffic lights, junctions and roundabouts, where the road infrastructure permits. Such vehicles will have full connectivity with each other and with the road infrastructure itself which will allow the vehicle not just to navigate through its immediate environment but to plan ahead effectively taking real time traffic conditions into account. At this stage the driver will not even need to touch the controls during the course of the journey. 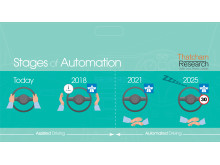