British Insurers have today highlighted the potential dangers of ‘autonomous ambiguity’, as vehicles with different levels of autonomy, or driverless technology, increasingly become a feature of UK roads.

With important and wide-reaching changes being defined by international regulators on what Assisted and Automated systems can and can't do, the Automated Driving Insurer Group (ADIG), led by the Association of British Insurers (ABI) in collaboration with Thatcham Research, has released a white paper setting out the latest position of UK insurers.

The ‘Regulating Automated Driving’ paper is set to reveal that UK insurers, including AXA, Admiral, Ageas, Allianz, Aviva, Co-operative Insurance, Covea, Direct Line Group, esure, LV, RSA, Zurich and the Lloyd’s Market, strongly support vehicle automation in the firm belief that it will deliver a significant reduction in accidents. However, there are real concerns about driver confusion caused by so-called intermediate automated systems. Such systems offer significant self-driving capability but require the driver to take back control of the vehicle in certain circumstances.

Peter Shaw, Thatcham Research CEO comments, “Vehicles with intermediate systems that offer assisted driving still require immediate driver intervention if the car cannot deal with a situation. Systems like these are fast emerging and unless clearly regulated, could convince drivers that their car is more capable than it actually is. This risk of autonomous ambiguity could result in a short term increase in crashes.”

The paper suggests that a clear distinction between Assisted and Automated systems should be made by International Regulators considering design standards for these vehicles. Therefore, a vehicle should be clearly identified and marketed as Automated only when:

“The insurance industry strongly supports the development of automated driving technology – which we see as the logical conclusion to work over several decades to reduce the numbers of people killed or seriously injured on the roads,” comments James Dalton, Director of General Insurance Policy at the ABI. “However, we know all too well from conventional vehicles that drivers often misunderstand what their vehicles can and can’t do. Therefore, consistent standards are needed so that those taking up automated driving technology can do so with confidence.”

David Williams, ADIG Chairman and Head of Underwriting at AXA said: “Autonomous Vehicles will make our roads much safer, but inappropriate use or marketing of intermediate technology could confuse road users and cause unnecessary accidents. Clarity over system capability and commitment to share vehicle data with insurers will help public confidence, and help rather than hinder development in this area”

The paper also highlights the need for more clarity in how Vehicle Manufacturers give names to assisted driving systems. Shaw continues, “Vehicle Manufacturers should be judicious in badging and marketing such systems, avoiding terms which could be misinterpreted as denoting full autonomy. Hybrid systems which creep into the intermediate grey area between Assisted and Automated should also be avoided.”

A full version of the ‘Regulating Automated Driving: The UK Insurers’ View’ paper can also be downloaded from:

The Automated Driver Insurer Group (ADIG), led by the Association of British Insurers (ABI) and Thatcham Research, was formed in 2016 to consider key issues relating to automated driving on UK roads, particularly concerning insurance and liability. The Group feeds in to ABI policy as well as work with the Government on shaping the future of automated vehicle use in the UK.Companies represented on the Group include AXA, Admiral, Ageas, Allianz, Aviva, Co-operative Insurance, Covea, Direct Line Group, esure, LV=, RSA, Zurich and the Lloyd’s Market. 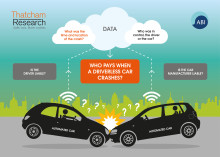 ABI and Thatcham Research ask: "Who pays when a driverless car crashes? "

• Future legislation needs to protect consumers in the event of an accident with an automated car • British insurers are leading efforts to have a standard set of data agreed at an international level • Car manufacturers and legislators need to work with insurers to establish a framework • Data should be easily accessible to determine who was in control - the driver or the vehicle? 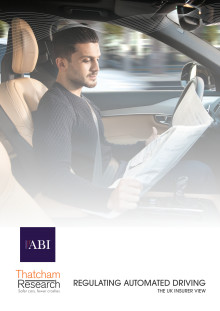 A clear distinction between "Assisted" and "Automated" systems should be made by International Regulators considering future design standards for vehicles.