With its 50th anniversary approaching in 2019, Thatcham Research has long worked with the motoring media to influence safe car design, drive security standards and support the independent repair sector. Its dedicated research, testing and training in these key areas has had a marked impact on the industry over the years.

Richard Aucock, chairman of the Guild of Motoring Writers comments, “Almost 50 years of tirelessly helping explore and improve the safety of vehicles on our roads makes Thatcham Research a very deserving winner of this year’s Kia and Guild of Motoring Writers’ Special Commendation for a Contribution to Motoring Award. The organisation’s influence is enormous, and its work has doubtless saved many lives. The Guild and Kia judges hope this award recognises everyone at Thatcham Research for their hard work in making motoring safer.”

James Smith, head of communications at Thatcham Research said, “We would like to thank the Guild of Motoring Writers for its contribution to the Thatcham Research ‘Safer cars, fewer crashes’ mission. Realising that mission would simply not be possible without a close working relationship with the UK’s most talented and fearless motoring writers. As the automotive industry continues to go through the most significant changes in its history, the role of the media in educating and raising awareness has never been more vital.”

The Guild of Motoring Writers' annual awards are the longest established and most prestigious in automotive media, and recognise excellence by Guild members and non-members working in motoring editorial.

For more information on the awards and the night’s other winners, please visit: 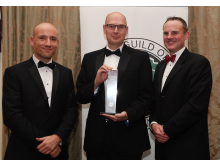