Brussels, 20 April – The Toyota Prius is the first car to have undergone Euro NCAP’s newest test of autonomous emergency braking (AEB) technology for pedestrians. By including this test as part of the safety rating, Euro NCAP takes the lead world-wide in encouraging advanced crash avoidance technology for all cars. Also released today is the Suzuki Baleno with the first dual rating.

The latest generation Autonomous Emergency Braking systems are not only able to detect vehicles ahead but also in more challenging situations where pedestrians are at risk of being run over. By braking the car automatically, the system helps to avoid or mitigate a crash. In the Prius tests, the standard fitted “Toyota Safety Sense” effectively recognised potential crashes with pedestrians and cars and has helped the Prius achieve the first 5 star rating in 2016.

The Suzuki Baleno received 3 stars based on the standard safety equipment. Suzuki offers the optional safety pack ‘Radar Brake Support’ which includes an AEB City and AEB Inter-Urban system. With the pack included, the Baleno achieves 4 stars and is the first vehicle to be assessed under the new dual rating.

From this year, Euro NCAP allows two star ratings for the same vehicle: by default, a base rating is generated for a car equipped with safety equipment which is standard on the model range throughout EU28. If the manufacturer wishes, a second rating may be published for the car fitted with a ‘safety pack’ which is available on all variants but may be sold as option or standard in some markets. This dual rating allows consumers to easily understand the safety benefit which can be achieved by the additional crash avoidance equipment offered.

“The inclusion of AEB Pedestrian in the rating is a key milestone in the development of automotive safety that will help the proliferation of the crash avoidance technology into all segments of the market. At the same time, to provide accurate and clear information to consumers about the latest systems and what benefit they might bring, is becoming more challenging. The dual rating will simplify the choice for the safest car”, says Dr Michiel van Ratingen, Euro NCAP Secretary General. 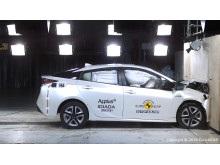 Frontal Full Width test. Takes place at 50 km/h, 100% of the width of the car striking a rigid barrier. 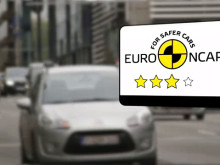