The nightmare scenario of being stationary in a traffic jam as a lorry bears down at speed could become a thing of the past, as thousands of larger vehicles on UK roads move a significant step further towards safety with new rulings coming in this autumn.

From 1 November this year, EU legislation will mandate the fitment of Autonomous Emergency Braking (AEB) systems on most newly registered Heavy Goods Vehicles (HGVs) over 7.5 tonnes. These vehicles are involved in one in five deaths and serious injuries on UK roads.

Standard-fit AEB systems are currently available on nearly 11 per cent of new cars, and offered as an option on a further 18.5 per cent. According to Euro NCAP and ANCAP, the independent safety bodies for Europe and Australasia, AEB is already leading to a 38 per cent reduction in real-world rear-end crashes and proving to be the key to gaining the coveted NCAP 5 star safety rating.

“The proportion of truck fleets with AEB, however, is negligible,” says Peter Shaw, Chief Executive of Thatcham Research, which has led the way in the UK for testing AEB on cars. “The Commission’s ruling to make it mandatory has spurred the industry to catch up, but it will be many years before the UK’s fleet of 500,000 HGVs are all equipped with this level of safety.

“We know the devastating effect of a large lorry failing to stop and running into a stationary car – or multiple cars. Haulage operators need only to see AEB in action or watch video footage (https://www.youtube.com/watch?v=ArwVZrEbW7k) to recognise this is truly impressive and effective technology. Avoiding a crash is critical – not just to the lives of road users, but to protecting the company’s legal standing and reputation.”

Current AEB technology on some commercial vehicles exceeds the vehicle to vehicle avoidance performance of even the most advanced car systems, although cars are still capable of a much broader spectrum of avoidance scenarios including collisions with pedestrians and other vulnerable road users.

“Whilst the impending EU legislation on HGVs is great news, the situation on Light Commercial Vehicles (LCVs) is still a concern. From a fleet of nearly 2.7 million LCVs on UK roads, we know of just two models with optional AEB available on the UK market: the Ford Transit Connect and the Ford Fiesta van both have Active City Stop, although others are being introduced towards the end of this year.”

“EU legislators recognise the importance of mandating safety technology on the largest vehicles on our roads. The most responsible fleet buyers are starting to select AEB fitment on their cars. It’s now time to recognise that if you need any form of commercial vehicle for your business or service using publicly-funded roads, you have a duty of care to minimise death, injury or damage.”

The Motor Insurance Repair Research Centre, or 'Thatcham Research' as it is widely known, was formed in 1969 by British insurers. Its main aim is to carry out research and testing to contain or reduce the cost of motor insurance claims, whilst maintaining safety standards.

Thatcham reviews every volume new car model entering the UK, risk rating it for the ABI’s Group Rating Panel and conducting an in-depth review of the new model’s repair information. As well as its world leading crash and track research, Thatcham tests and accredits crash repair parts, vehicle repair technicians and a number of other products and services within the collision repair industry for insurers, motor manufacturers, equipment manufacturers and suppliers.

A founder member of the international Research Council for Automobile Repairs (RCAR), Thatcham has also been a member of the European New Car Assessment Programme (Euro NCAP) since 2004. The organisation has an established reputation as an automotive standard setter and a proven capability in delivering unique, high quality, ready to use and bespoke products and services to the automotive industry, on a global stage. 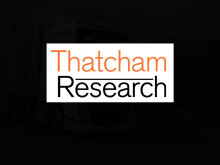 From 1 November 2015, EU legislation will mandate the fitment of Autonomous Emergency Braking (AEB) systems on most newly registered Heav...