Drivers of fully automated vehicles should not be held liable for accidents involving their cars while the technology is in charge, the insurance industry is warning. The Association of British Insurers (ABI) has submitted its views to the Law Commission which is helping work out how the UK will incorporate the rules currently being decided internationally on standards for autonomous vehicles.

Once vehicles can manage all road conditions and scenarios, giving those on board permission to stop thinking about the driving task and do other things, the ABI says it would be unfair to expect the driver to intervene if the on-board systems got something wrong or were unable to prevent an accident.

This means manufacturers must not be allowed to have their vehicles recognised as autonomous when a driver might still be expected to act in an emergency. Any process which involves the vehicle handing back to someone on board must be clearly signposted and give the driver enough time to regain control safely.

Until a vehicle can handle emergency scenarios without driver intervention they can only be considered to offer advanced driver assistance. In these vehicles, drivers do remain fully responsible for the car and must be ready to take back control at any moment.

Establishing the point at which liability moves from the driver to the vehicle requires a number of core things:

Matthew Avery, Director of Research at Thatcham Research, said: “The future of motoring is extremely exciting and approaching fast. The life-saving potential of fully automated vehicles is clear, but it is important their introduction onto the UK’s roads is handled carefully to guard against serious accidents which could potentially undermine public trust in this new technology. This also means reassuring the public that when the time comes, they will not find themselves being held liable for the actions of a truly autonomous vehicle.

“Until this time, there will be a mix of vehicles on our roads with different capabilities: some being driven manually, others automatically. So it is vital that we make sure they can share the same road space, and remain safe. Organisations such as ours will have an important role to play in helping ensure they do, whilst also helping consumers understand what is expected of them when they are behind the wheel.”

A working party on automated, autonomous and connected cars, part of the UNECE (United Nations Economic Commission for Europe), is in the process of setting out detailed criteria vehicles will have to meet to be considered autonomous. The UK Government’s ambition is to have the necessary legislation in place to allow fully automated vehicles on British roads from 2021, but insurers want to make sure the transition is handled as safely as possible.

The response to the Law Commission’s preliminary consultation paper on automated vehicles, submitted jointly with Thatcham Research, also emphasises the insurance industry’s high level of support for autonomous motoring given the potential benefits to road safety.

Laurenz Gerger, policy adviser for motor insurance at the ABI, said: “There will come a point when the drivers of today are effectively just passengers of a vehicle driving itself, and at that stage we want motorists to be reassured they can’t be held liable for an error made by a vehicle or a piece of on-board technology. Standards being set internationally, and the way they are adopted in the UK, need to enforce strict requirements to ensure vehicles aren’t rushed onto the roads under the badge of autonomous when in fact they may still need human intervention at short notice.

“Fully autonomous vehicles have the potential to radically improve road safety and insurers are heavily involved in the trials taking place around the country. A safe transition to automated driving requires clear definitions to help consumers understand their own and their vehicles’ responsibilities, and data must be available in the event of an accident to help insurers and the authorities understand what went wrong.”

The ABI and Thatcham Research have previously set out a list of ten tests that vehicles must meet before they can be considered fully autonomous and therefore allow drivers to do other tasks. 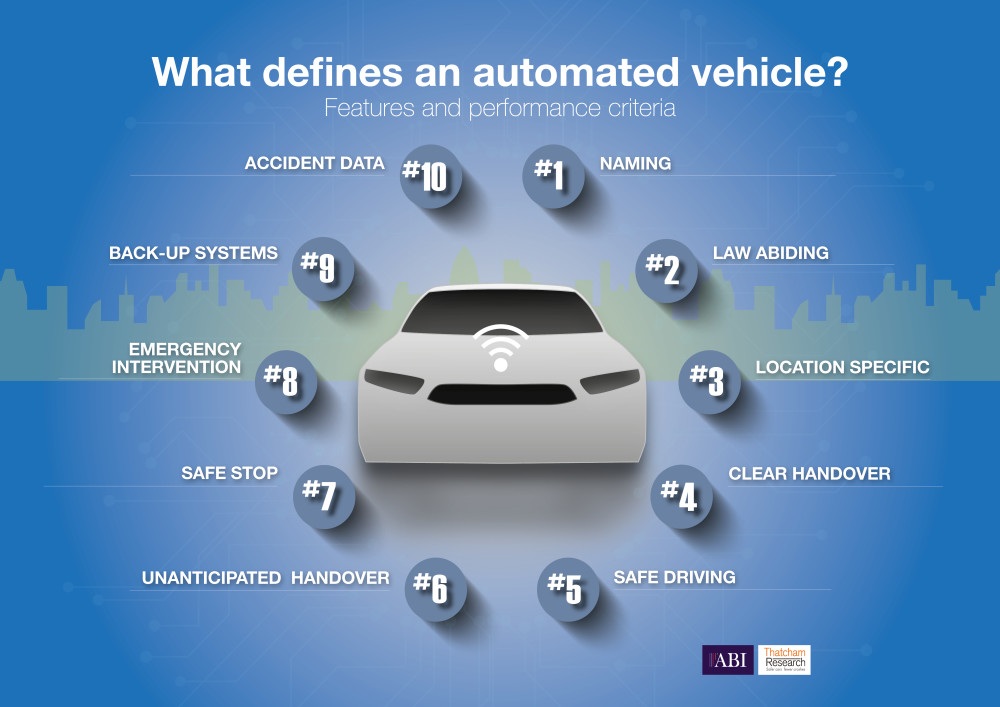 The evolution of different risks and how they are handled by the insurance industry is one of the themes at this year’s ABI Annual Conference, being held in London on February 26th.

The Association of British Insurers is the voice of the UK’s world leading insurance and long-term savings industry.

More news and information from the ABI is available here: www.abi.org.uk.