Safety testing results for four vehicles across a range of categories have been released by Euro NCAP today. The VW Touareg and Audi A6 both scored a maximum five-star Euro NCAP rating, while the Ford Tourneo Connect performed solidly, putting it at the top end of its category. However, the Suzuki Jimny's impact testing and crash avoidance results have disappointed safety experts.

Matthew Avery, director of research, Thatcham Research comments, “The Suzuki Jimny’s performance in testing betrays its ostensibly rugged exterior. As a completely new vehicle, it should offer far more protection to drivers in the event of an accident. Its safety technology did not perform optimally either. The youthful audience the Suzuki Jimny has been designed for deserve better in terms of passive and active safety.”

According to the Euro NCAP report, the Suzuki Jimny’s Autonomous Emergency Braking (AEB) system “showed weak performance in tests of its pedestrian avoidance in daylight and does not operate in low light.” The Jimny was eventually given a three-star rating.

Avery continues, “Its pleasing to see carmakers like VW and Audi rise to the challenge presented by the new AEB cyclist tests, which were brought into the Euro NCAP programme at the start of the year."

Although it did not achieve a full five-star Euro NCAP rating, the Ford Tourneo Connect did attain a solid four-stars.

Avery comments, “Ford has given the Tourneo Connect more than a facelift, from a safety perspective at least. It’s pleasing to see a number of standard-fit driver aids, which all performed well in testing. This is especially important in larger vehicles as they present a greater potential threat to cyclists and pedestrians.” 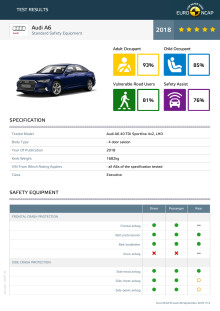