As Euro NCAP release their last vehicle safety ratings for 2015, Thatcham Research believes that the prospects for “vulnerable road users” such as pedestrians and cyclists are improving, as vehicle manufacturers future proof their safety systems using camera technology.

“We’re starting to see more and more camera based Autonomous Braking systems which enables effective braking over a much higher range of speeds with many now being able to completely avoid a collision at speeds over 30 mph,” said Andrew Miller Chief Technical Officer at Thatcham Research and President of Euro NCAP.

“Along with road sign recognition and lane control, the other key benefit of a camera based system is the ability to not only work out how far away an object is but to categorise it and deal with it accordingly. It is this technology that will be fundamental in pedestrian and cyclist safety in the future, and will also form the building blocks towards the fully driverless car.”

A review of cars that score a 5 Star Euro NCAP safety rating shows that “camera” technology is increasingly being used in Autonomous Emergency Braking (AEB) systems. Indeed, of the cars achieving top marks this quarter, 63% feature some level of camera technology.

Although road casualty rates in general have been decreasing in recent years, the number of cyclists and pedestrians using the road has increased as people try to drive less and get fit. Euro NCAP are responding and from January 2016 cars will be additionally assessed for their ability to recognise and brake to avoid pedestrians, while in 2018 a similar test will be introduced around cyclists. Vehicle that are unable to prove their effectiveness in these scenarios will inevitably find the sought after 5 star rating increasingly difficult to attain.

Of the 5 star results released this quarter, NCAP’s UK based test centre Thatcham Research put the Jaguar XE and XF through their paces, both in the crash lab and on the test track, where Jaguar proved once again that effective Active Safety is key to gaining the full 5 stars.

Featuring a stereo camera system, both the Jaguar XE and XF scored highly in NCAP’s Safety Assist category, with higher speed Autonomous Emergency Braking (AEB) and Lane and Speed Assistance systems fitted as standard across the range, whilst an Active Bonnet ensured both vehicles also picked up additional marks in the Pedestrian protection category.

Across 2015 Euro NCAP have provided safety ratings on more than 40 cars, with nearly 90% achieving at least 4 stars. 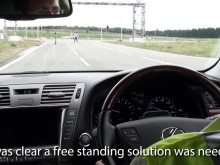 An in-depth look at some of the safety testing that Thatcham are involved with in protecting vulnerable road users. Auto Braking systems ... 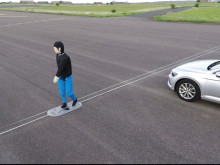 As Euro NCAP release their last vehicle safety ratings for 2015, Thatcham Research believes that the prospects for “vulnerable road users...