How safe is the van delivering Christmas to your front door?

Almost 90% of Britons bought something online in 2019.[v] And with lockdown restrictions eating into valuable shopping time in recent weeks, many of us will once again be relying on a van to safely deliver Christmas to our front door this year.

But how safe are these vehicles that are deployed onto the roads in their thousands to fulfil our orders? The answer is sobering – not only for the couriers themselves, but also for the motorists and vulnerable road users that share the roads with vans.

The Renault Master, Nissan NV400, Renault Trafic, Vauxhall Movano and Fiat Talento all performed so badly that they were handed a ‘Not Recommended’ rating.

Only Volkswagen’s Transporter, the Ford Transit and Mercedes-Benz’s Vito scored a ‘Gold’ rating, while five others were ‘Silver’ and another six ‘Bronze’.

“It’s a serious issue that needs addressing urgently, particularly with van numbers increasing and the continued surge in demand for home deliveries during the pandemic and before Christmas.” 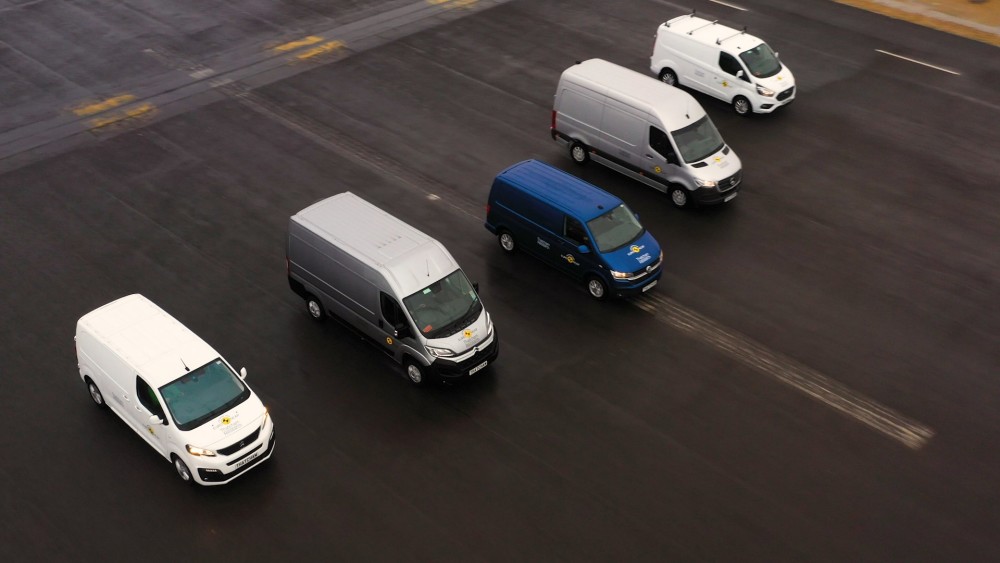 Vans are involved in more accidents that result in fatal injuries to other road users, per mile travelled, than any other type of vehicle on the UK’s roads.

In the five years up to 2018, collisions involving vans were responsible for a 14% increase in the number of serious injuries to pedestrians, car occupants, and van occupants. Cyclist casualties also rose by 22%.[vi]

Injured car occupants are 40% more likely to be killed or seriously injured when involved in a head-on incident with a van compared to another car.[vii]

Vans are almost completely devoid of the Advanced Driver Assistance Systems (ADAS) that have been proven to reduce accidents when fitted to cars.

For example, only 12.8% of new vans were fitted with Autonomous Emergency Braking (AEB) technology as standard in 2019, compared to 62% of new cars.

“There is a definite lack of parity between the levels of collision avoidance technology on vans compared to cars,” Avery explained. “Modern cars have lots as standard, but vans have barely any. Brands are making a clear decision not to fit this important technology as standard and van operators are not even buying it as a cost option.

“The lack of parity even exists within the same manufacturers. Take Renault, for example. Its five-star-rated Clio has lots of standard fit Advanced Driver Assistance System (ADAS) technology that can save lives. But its Trafic van has practically nothing, not even as an option.”

To highlight the extent of the problem and encourage wider fitment of ADAS technology, Euro NCAP and Thatcham Research have launched a new Commercial Van Safety Rating that assesses the performance and fitment of emergency braking, speed limiter, and lane support systems, as well as seat belt reminder technology. Safety tests will be conducted annually.

In the first batch of tests, only VW’s Transporter – with a performance score of 65%, Ford’s Transit (63%) and Mercedes-Benz’s Vito (61%) earned a ‘Gold’ rating. Both the VW and Mercedes models are fitted with AEB as standard in the UK, proving lifesaving tech doesn’t always have to be a cost option.

Five other vans were rated ‘Silver’, and six were ‘Bronze’. 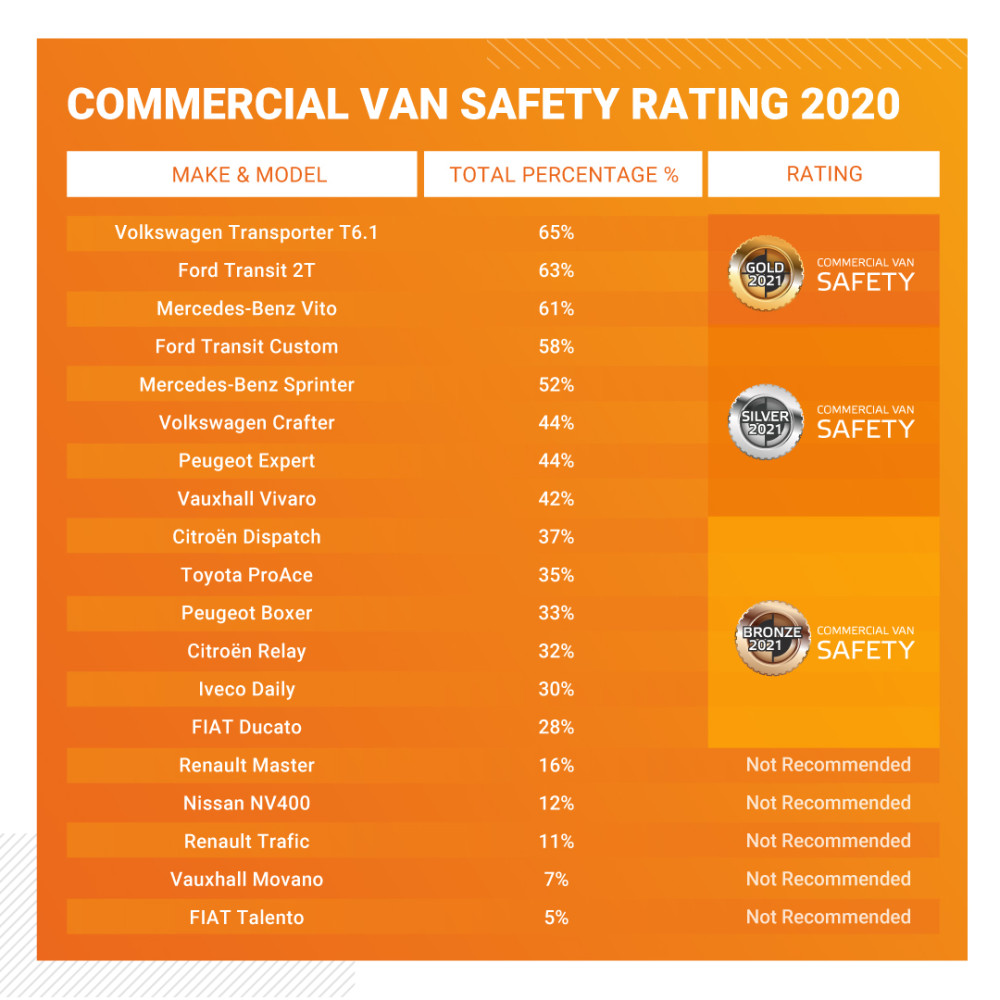 “These findings show vehicle manufacturers are withholding critical safety technology from their vans. It’s a ridiculous situation because the systems already exist and could be fitted if they wanted them to be,” Avery said.

New General Safety Regulation (GSR) legislation will require all new vans to be fitted with certain ADAS technology by 2024.

Thatcham Research is keen to see the UK deliver on the commitment it made to sign up to this before leaving the EU. But, together with Euro NCAP, it also wants to see a change in the van manufacturers’ approach before then.

Avery concluded: “We want to see more collision avoidance technology fitted as standard and readily available long before then.

“Decisive action will reduce van collisions, create greater parity between cars and vans, and help to protect the public from serious injury and death as more vehicles on our roads will have lifesaving technology.”

Find out more about the testing here:

A close look at safety

The introduction of the new Commercial Van Safety Rating has been welcomed by two leading motor vehicle insurers along with Driving for Better Business and Transport for London.

Martin Smith, Technical Claims Manager, Motor, Aviva, said: “Over the last few years great strides have been made in the development and fitment of ADAS safety features to passenger cars. These features help protect drivers, occupants and other road users by alerting drivers, and taking active steps to avoid or reduce the severity of a collision.

“Unfortunately, the adoption of ADAS safety features in the light commercial vehicle (LCV) van market has not been mirrored. Therefore, we welcome the launch of the new Commercial Van Safety Rating by Euro NCAP and Thatcham Research.

“We are confident the new Euro NCAP assessments of LCV’s will provide users and businesses with important safety information to assist them in buying safer vehicles and encourage commercial van manufacturers to fit more ADAS technology to their products. Ultimately, this can only be a good thing for the safety of all road users.”

Jon Dye, Director of Underwriting for Motor at QBE Europe, said: “We welcome the results of this study and Thatcham Research’s call to increase use of safety technology on vans. Making sure vehicles on the road meet certain standards and better utilise Advanced Driver Assistance System (ADAS) technology will help reduce accidents and improve road safety.

“As well as safer roads, this may also lead to a reduction in those insured and uninsured losses resulting from accidents, helping to reduce the overall cost to drivers and businesses as well as controlling insurance premiums in the long term.

“We would encourage our customers to take a close look at the safety of their vehicles in relation to this study and carefully consider areas of improvement, some of which could have significant benefits.

“By improving the safety, and reducing the likelihood of vehicles being involved in an accident, drivers and businesses can reduce the amount of time their vehicles are off the road, the associated costs and allow them to be more efficient in producing a better outcome for their customers.”

Simon Turner, Campaign Manager for Driving for Better Business, a government-backed Highways England programme to help employers reduce work-related road risk said: “The wide fitment of AEB and other ADAS technology to vans could be a massive step forward in road safety however, with most vans being procured on cost alone, fleet operators who don’t demand this technology may well be missing out on the potentially huge associated business benefits.

"Time and time again, van fleet operators tell us their biggest concerns are the business disruption caused when vans are off the road for repairs, and the rising cost of insuring their vans – often a direct result of their collision record.

"ADAS technology fitted to cars has been proven to significantly reduce collisions, repair costs and third-party claims. Firms that purchase or lease vans should now be looking for these same benefits and specifying this technology on all their new vehicles.”

“Last year, 125 people were killed on London’s streets and more than 3,700 were seriously injured. More than 1 in 6 of all road traffic injuries in London involved a goods vehicle. Each is an unacceptable tragedy. We are working tirelessly to eliminate this from London’s roads and improving safety measures across all vehicle types is key. Our Bus Safety Programme is already driving major improvements in safety across the bus network and from 1 March 2021, our new Direct Vision Standard will be enforced on all roads across our city, helping to eliminate lethal blind spots on HGVs.”

[iii] PACTS ‘What kills most on the roads’ report, November 2020