Nationwide Team Member Daryl Head, who graduated from the Thatcham Research Automotive Academy in 2015, will soon be heading off for the adventure of a lifetime having qualified for World Skills 2017 in Abu Dhabi this October.

Daryl’s journey began in 2012 when he started his apprenticeship in paint just days after leaving school. Since then he has gone on to compete in the National Skill Competition and be named Nationwide Apprentice of the Year. Three years after beginning his training, Daryl was scouted to join Team UK during a Skill Auto competition, and earlier this year he was named as the UK representative in his discipline for World Skills 2017.

Daryl, who specialises in paint and refinishing says, "It has been an amazing experience for me so far and with the support of my employer Nationwide, friends, family and Thatcham Research, I successfully made it through the selection process.

“I always wanted to work in the repair industry, tinkering with cars with my Dad who was self-employed in the trade from a young age. I knew that University wasn't for me and that an apprenticeship would be a better option. There are so many opportunities within the industry, and so many areas to specialise in.”

Dean Lander, Head of Repair Sector Services, Thatcham Research Academy says, “We are proud that Daryl has been so incredibly successful. As we continue to see a real shortage of skilled technicians, he is a fine example of the young talent that must be attracted into the industry.”

As World Skills approaches, Daryl will be visiting Thatcham Research’s Automotive Academy to prepare, honing his skills and readying himself for the exacting challenges that lie ahead in Abu Dhabi.

Daryl continues, “Thatcham Research has offered me a series of training days to help me perfect my skills in six key areas for the competition. Combining what I get to work with at Nationwide every day with the training facilities at the Academy, while training with my mentor again has lifted my confidence and helped me focus.”

As part of his training, Daryl, 21, has travelled Europe, visiting Denmark and Northern Ireland to name but a few. He has completed a number of competitions to best prepare him for Abu Dhabi.

Louise Cope, People Director at Nationwide, said “We are so incredibly proud of Daryl. The determination and attitude he has demonstrated throughout his apprenticeship and career so far with us makes him a great asset to the team. The Nationwide Team have supported him throughout and will continue to do so during the entire World Skills competition. Daryl is the embodiment of our values, as we always strive for continuous improvement and believe our people are central to our success. We wish him the best of luck at World Skills in Abu Dhabi and look forward to a bright future as his career flourishes with Nationwide.”

Nationwide will be sharing details of Daryl’s preparation in the weeks leading up to World Skills October 14-16. Follow his progress on social media and at: http://www.nationwiderepairs.co.uk/blog

To find out more about the apprenticeship opportunities available at Nationwide, contact Talent@ncrc.co.uk or view current vacancies at www.nationwiderepairs.co.uk/careers. 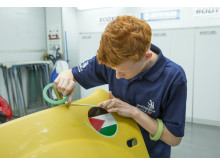