Euro NCAP is today announcing the introduction of a series of new safety tests into its programme. Vehicles launched in 2020 will undergo the new tests later this year, which Euro NCAP said have been introduced to “address long-standing needs in occupant protection, improve post-crash protection and promote the latest advanced driver assistance technology.”

Matthew Avery, director of research Thatcham Research and Euro NCAP board member, offers an expert view on the new protocols, which have long been part of the Euro NCAP 2025 roadmap:

“This is a new yardstick that vehicles will be measured against. We and Euro NCAP look forward to working closely with carmaker safety teams to drive towards strong results for these society-benefitting tests.

“These are the biggest changes to Euro NCAP’s impact testing protocols in a decade. Chief among them is the new ‘compatibility’ impact test. For the first time there will be two moving elements to the head on collision: the test vehicle and barrier. Most importantly we will not only look at the intrusion occurring to the vehicle being tested, but also to the new Mobile Progressive Deformable Barrier.

“The objective is to encourage makers of larger vehicles to share some of the burden of the impact with smaller vehicles. Historically SUVs and other big cars have offered very good protection to their occupants. However, the smaller vehicles they sometimes crash into can fare less well.”

“In the new compatibility test, if the larger vehicle is too stiff in an impact scenario, it will be penalised accordingly. This levels the playing field for all vehicle sizes, which is a win-win for road safety.”

In addition, a new ‘THOR’ mid-sized dummy will be used in the tests. Avery continues, “The THOR dummy is the most advanced we’ve ever worked with. It makes the new test especially challenging for carmakers, as the dummy more closely represents a human. The previous dummy we used was designed for impact scenarios that are less common today, while the THOR dummy is far more complex and sensitive and can record abdominal injuries.”

“As a result, carmakers not only have to tune vehicle restraints and structures to accommodate for the sophisticated THOR, but there is also the new barrier to consider.” 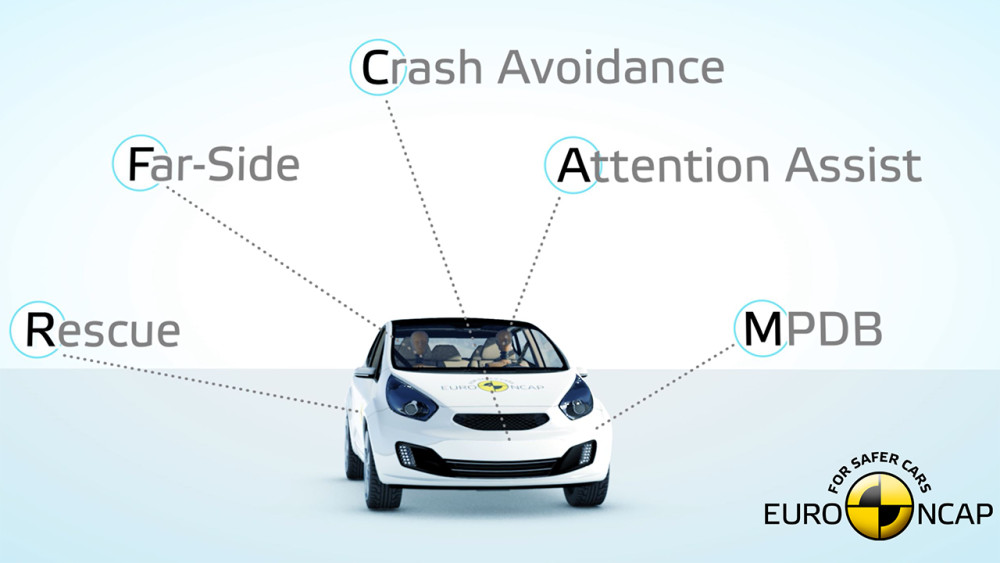 Another update announced by Euro NCAP today is to its side impact testing. Avery comments, “We want carmakers to engineer vehicles that offer compartmentalised occupant protection in side impact scenarios. This test originally focused on protection for the occupant closest to a side impact, but now assesses how occupants on either side of the impact interact with each other.”

“In these impact scenarios, occupants can be knocked around dramatically – not only into one another but also into the vehicle structures. The performance of airbags installed into centre compartments to mitigate this effect will now be assessed within the programme.”

‘Active’ safety tests to rate the performance of new Autonomous Emergency Braking systems have also been added into the world’s most stringent car safety regime.

“Technology continues to present the most exciting opportunities for complete crash avoidance,” says Avery. “As such, there are now two new Autonomous Emergency Braking protocols in the programme. The first, known as the Turn Across Path test, looks to prevent collisions with vulnerable road users and other vehicles at junctions.

“The other addresses reverse parking incidents. These are very common and expensive, and although most result in nothing more than a dinked bumper, the consequences can be tragic should an unseen child or elderly person be passing by the rear of the vehicle.”

Assessment of technology that indirectly monitors the driver to identify potential fatigue has also been introduced. Avery continues, “We believe that Driver Monitoring is the next big thing in active safety technology. In the short term it has a key role in detecting fatigue and distraction. However, these ‘Guardian Angel’ systems will also be fundamental to the safe introduction of the first Automated Driving Systems, by ensuring that the driver is ready to take back control of the vehicle when it is no longer in Automated Driving mode.”

The final pillar to Euro NCAP’s 2020 protocol announcement deals with post-crash safety. Avery comments, “As cars become ever more complex, so does the task facing first responders arriving at the scene of an accident. Knowing where it’s safe to cut a vehicle should extrication be required is increasingly challenging and carmakers will now be rewarded for making accurate rescue information available.”